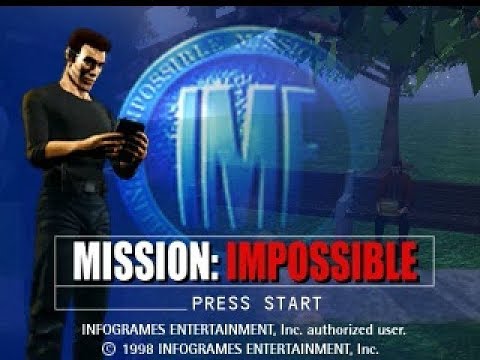 PlayStation version of the game Mission Impossible played on Impossible difficulty. Its another mixed resolution game so you may want to aspect correct the video to 16:9 to view gameplay in a more pleasing tv aspect.

I did not find much fun in this game. The controls are light and fast making it difficult to aim. A light button press sends the crosshair flying in whichever direction was pressed. Headshots are not at all easy to line up and can take a few goes to find the right spot which isn’t even always a direct hit :S

The end of the game was quite annoying as the enemies stopped dropping their weapons making it difficult to to kill the guards in my way and have enough ammo to get through the whole level. On the final snow level, I am sure when the helicopter explodes it should have taken out the guards around it. That was incredibly challenging having to kill those guards and the jeep before it leaves the compound. I couldn’t kill them before making the deal as that would have disrupted the disguise.

The game felt quite buggy in places with the enemy doing random things. The train level had a bug where if the train went in the tunnel before you get to phelps, the train just kept going with no new enemies to kill, I had to restart that. On one of the earlier levels when trying to leave the embacy, the enemies were running around trying to kill me even though I was disguised before entering the level, they had no reason to be after me. Anyway, onto the level start times:-